On Sunday, after a week off the ladies of H2 STL 15 Black returned to action at Crestview Middle School at the 15U Thunder Classic and captured their third 2nd place in Gold on the 2017-2018 season. After taking 2nd in Gold in their first tournament of the year a 16U in Perryville, the next week taking 2nd in Gold at Mineral Area and a 3rd in Gold at 15U Forest Park two weeks ago, these ladies have earned three medals in four tournaments this season. The girls charged forward into the Thunder Classic taking out PLVC 15-2, Serves-U-Right and a scrappy H2 STL 15 Illinois Black during pool play, taking 1st place with all three matches played without dropping a set. Entering the first round of medal play, it was an all H2 matchup pinning STL 15 Black against 15 Cardinal. The girls used a balanced attack, fast transitions and pinpoint serves to take out 15 Cardinal in two. All day on the court next to us, we eyed the team we knew we’d have to get through in order to earn 1st, a very talented Rockwood Navy 15 team that is currently 3rd in the Gateway Region ranking. The girls stepped onto the court for the Gold final with confidence exhuming from their bodies. After a monster warmup, it was back to back point exchanges until separation came at 12-10 and Rockwood never looked back. The 2nd set started off the same with H2 holding a brief lead until Rockwood’s same server that gave us fits the first set, had a short run to create a separation. Back to back questionable reffing calls put the girls behind and on the defensive for the rest of the set. We couldn’t overcome their speed and size losing the 2nd set 25-18 and going down in two. During the post-match huddle as I presented them with their 2nd place, I told them “that is by far the best team you have faced all year, and we had them on their heels looking around for two sets.” Although the score sheet said it was a loss for 15 Black, these girls now know just how talented they are and that they can compete against the best teams in the Gateway Region!

A true team effort across the board. Key accomplishments for the day were outside hitter Tori Mohesky who finished the day with her second triple double of the season with a team high 26 kills, 12 digs and threw in 11 serving aces. Middle hitter Riley Kleber brought in 15 kills and three huge blocks along with five service aces. Middle hitter Sally Albers, recent addition as a team practice player was promoted to play for Kenadi Barriger, who is recovering from a minor knee ailment, contributed 16 kills on 31 attacks. Right sides Myah Helmkamp and Cami Marteeny balanced out our attack system with 10 and 7 kills, respectively. Outside hitter Hailey Cortinas had a great defensive day with covering the back row with 12 digs. Libero Emily Johnston anchored the defense with a blistering 90% pass efficiency rate and had a team high 22 digs bringing her season total to 93 digs, along with 42 serves with an outstanding 50% ace/out of system ratio. Setters Sarah Gingrich and Anna Richter couldn’t be more of a balanced tandem of setters for this team. Sarah had 40 assists to Anna’s 39 assists. Anna had 24 serves with 100% serve percentage to Sarah’s 23 serves at 96%. These two young athletes directed a power attack of hitters to this point of the season better than any two setters I have coached. Middle Kenadi Barriger returns this weekend in a limited rep role as the girls are back at it this weekend at the TESL Center for the 15U March Madness where they hope to crack that 2nd place barrier. This will be our last test before next week’s trip to Bloomington for the Illini Elite 15U/16U JVA Central Finale. Great job ladies, Coach Jenna and I are very proud of you! 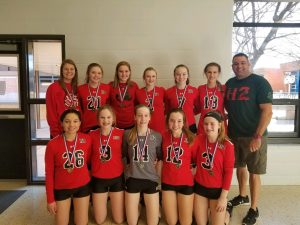